The 2019 MVC Field Hockey Coaches  All Star Meeting will be held on Monday October 21st at 6:30 pm (or as soon as everyone arrives) in the library across from the main office at Spruce Mountain High School.

Senior Nora Conrad scored both goals for the Winthrop Ramblers to lead them to a 2-0 victory over Mountain Valley HS in the Mountain Valley Conference field hockey championship game. After a scoreless first half in showery conditions, Conrad took a pass from senior Moriah Hajduk and got the ball behind Falcons goal keeper Nora Tag and put the ball in the net for the winning goal. Conrad added an insurance goal in later in the half, jumping on a shot that went off the post and deflected to her, allowing her to score the gamebreakinig goal.

Senior Aiva Agri had 4 saves for Winthrop and Mountain Valley's Tag, a freshman, had 3 saves. 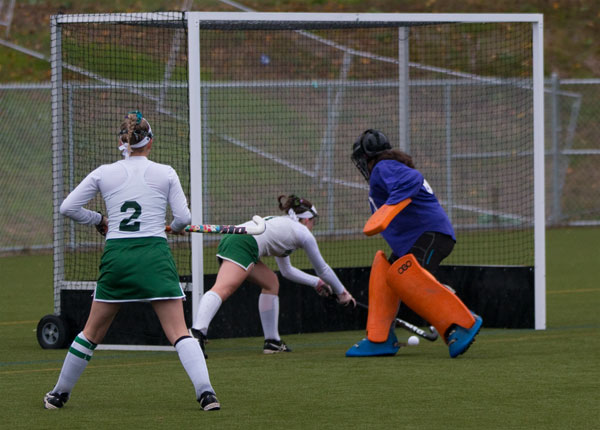 In earlier matchups, the teams split their two games, with the Ramblers defeating the Falcons 1-0 at Winthrop and the Falcons handing Winthrop their only loss, 3-2 in the last game of the regular season at Hosmer Field. Winthrop enters the MPA playoff as the Number 1 seed in Class C North while Mountain Valley is the top seed in Class C South.

The 2018 MVC Field Hockey Coaches Meeting will be held at 6:30 pm on October 10th at Spruce Mountain High School.